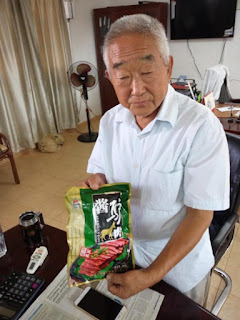 So great is the demand for the export of the animals that several African countries have banned donkey slaughter in response to widespread poaching, and to mitigate the impact on local farmers, who rely on the animals for their livelihood. As a result, theft and cross-border smuggling is rife, particularly into Kenya, where donkey slaughter remains legal. Traders use informal routes, and official statistics on smuggling are nonexistent. But abattoirs admit Kenya’s neighbors are a major supply point.
“There are donkeys that are brought in from as far as Somalia,Many of the donkeys that are brought to the slaughterhouse by traders from the border regions actually come from across the border, especially from Tanzania.”
Twice a month, Kones, 45, embarks on a three-day journey by foot with a herd of donkeys from a livestock market in Bomet County to Star, a donkey slaughterhouse located in the semi-urban town in Naivasha.
The $6 million Chinese-owned donkey export slaughterhouse is one of three to open in Kenya in the last 18 months. Since the opening of the abattoirs, which process hundreds of donkeys a day, the price of an adult donkey in the country has soared t in less than two years.
Kones twice-monthly trek, herding fifteen donkeys at a time, is a ritual he’s become accustomed to since the abattoir opened last year. It’s also become his primary source of income.
“Before this facility was opened, I used to deal in cattle, goats, sheep, and chicken,” he says. “But, it has now given us a good market for donkeys.”
The export of donkey skins and meat to China has invaded  Africa, presenting both a major opportunity and threat to local farmers. The animals are used in ejiao, a traditional Chinese remedy, and in some areas, as a delicious, nutritious food source. The Donkey Sanctuary, a UK-based charity, puts the annual demand for donkeys at 10 million, a quarter of the estimated global population. China had about 11 million donkeys about two decades ago, they now number about six million. It has turned to Africa in recent years to make up the shortfall.