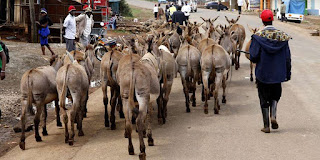 Donkey keepers in Embu and Kirinyaga counties have protested the increased theft of their animals due to high demand of their products, and have appealed to the government to stop licensing more slaughterhouses.
The tens of riders said donkey population in the area was on a steady decline and they could lose their source of livelihoods unless the government curbs the theft.
A recent survey found the number of donkeys had declined from 4,000 to 2,500 in Mwea in the last two years, according to Mwea Donkey Owners Association chairman Cyrus Gitonga.
He said the animals were being sought for their meat and skin by abattoirs, with theft of donkeys at night being frequent.
The donkey population cannot easily be replenished as females produce just one foal a year and are prone to miscarriages under stressful conditions.