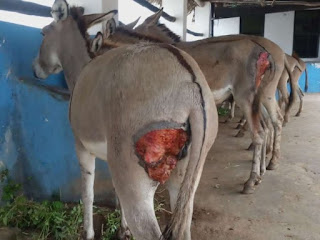 Kihoto Village in Naivasha are a worried lot after an invasion of hyenas in their villages.
The scavengers move from house to house in search of livestock, chicken and ducks to feast on.
In a bizarre twist, they are now also pouncing on cats and dog.
Residents of Kihoto,Karati,Kabati and Kayole villages are worried that the animals might turn to small children.
They want the Kenya Wildlife Service to act fast and contain the insatiable animals.
More than 300 cows, goats, sheep, donkeys, cats and dogs have been killed by the hyenas in the last two months. Others have suffered bite wounds.
Residents have accused the KWS of failing to act despite receiving reports.
“I can’t remember a night that has passed without hyenas attacking homes in the recent past. Initially, they attacked donkeys only, but now, our livestock is in danger,” he said.
“We were shocked when we recently discovered that cats and dogs are not being spared. It’s obvious that they are getting bolder. Our women leave babies sleeping in their huts as they go about their duties. We are concerned that these animals will start eating them,” Kiiru said.
Many herders have complained that they have lost their livestock to the hyenas. They have threatened to kill the animals if the KWS continues remaining silent.
The herders are demanding compensation from the KWS.
Gathuya, who has lost 10 goats from last November, said that is the biggest loss he has ever suffered as a farmer.
“I have lost so much. We shall not stomach this anymore, that’s why we are joining hands to hunt down and kill these hyenas if no one does anything soon. We must also be compensated for the animals we have lost,” he said.
Nakuru county senior KWS warden Matthew said there could be some truth in the reports of hyena attacks because the affected villages border bushy areas.
He denied residents of Kayole had reported to his office. He said he is only aware of the cases in Kihoto and Karati.
Matthew said a team has been dispatched to assess the situation and hunt down the hyenas.
He cautioned residents not to hunt down the hyenas, saying it is dangerous.