Kenya at the center of illegal donkey trade 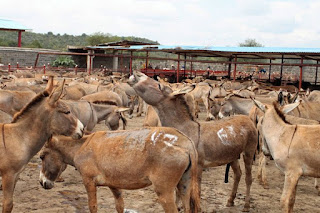 Trucks arrive everyday at the Moyale border with donkeys headed for slaughterhouses. There are reports that donkeys are also being sourced from Somalia and Tanzania, owing to the shortage.
Donkey Rights Group officer Kamau said every donkey stolen from a dependent family or community in Ethiopia sets in motion a story of broken hopes and poverty.
“It might mean that families cannot afford to put food on the table that night, or that they have to work even harder and longer now that their principal means of earning a living has gone.”
In Naivasha, Donkey Rights Group met taxi driver Lawrence who said he had made “lots of good money” from the Star Brilliant abattoir since it opened in 2012.
“When the abattoirs were opened, people willingly sold their old, injured and excess donkeys. With the surplus donkeys gone, the demand is up by thousands and yet people don’t want to sell any more,” Mr Lawrence said.
“The scarcity has bred demand, and demand has bred incentives. The Chinese now pay more for donkeys,” he added.
Mr Kamau said most of the donkeys slaughtered in Kenya are stolen or bought in Ethiopia before being smuggled in.
Kenya has been identified as a conduit for smuggling donkeys from neighboring countries, according to a new report.Demand for donkey skin, which is used in China for making traditional medicine, has been blamed for halving Kenya’s donkey population.


Donkeys remain crucial to rural economies, where they are used to transport food, water, firewood and farm produce.But in China, they are used in production of ejiao, a traditional medicine made from gelatin extracted from boiled donkey hides.


Ejiao was in the past prescribed primarily to supplement lost blood but today it is sought for a range of ailments, from delaying ageing and increasing libido to treating side effects of chemotherapy and preventing infertility, miscarriage and menstrual irregularity.
As demand for ejiao in China soars by the day – fetching around 400USD (Sh40,700) per pound, up from nine USD per pound – Chinese traders have turned to Kenya in recent years to meet their demand for donkey skin, a move that has increased theft and cross-border smuggling of the animals in Kenya.
Three Chinese companies have so far opened donkey slaughter houses in the country: The Zilzha Ltd Slaughterhouse in Nakwaalele, Turkana, Goldox donkey slaughterhouse in Mogotio, Baringo, and Star Brilliant Abattoir in Naivasha, Nakuru.
The 2009 census estimated that there were about 1.8 million donkeys in Kenya. But animal rights activists have raised the alarm, saying that since at least 100,000 donkeys are slaughtered each year, they could become extinct.
Moreover, some unscrupulous traders have been killing the animals illegally and passing them off as beef in local butcheries.