DONKEY IN DANGER BECAUSE OF BITING INSECTS

Residents of Rei in Meru County have resorted to dressing their donkeys in trousers to ward off flies whose bites cause open wounds, with the animals eventually dying.

Locals are afraid that the fly, which invaded the area two weeks ago, will spread to their cows and goats, a main source of livelihood in the area.

About 10 donkeys have died as a result of bites from the mystery fly.

He said the pest has a narrow appearance with a sharp mouth. Its bites and causes itching on animals.

“When they became a nuisance to the animals, we thought they were normal flies we are used to after rains. But, after the animal is bitten by the fly, it starts developing wounds on the legs. The donkey grows weak and dies. Its bites are lethal,” Mr Kinyua, whose donkey is also affected, said. 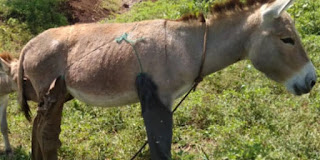